ManCandy Monday and Flash Fiction just because… “The Brooder” 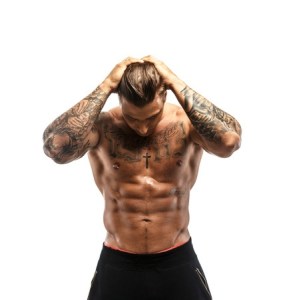 He was there, standing at the end of the bar, his dirty blond hair ruffled like he’d been combing his fingers through it in frustration. His gaze was dull, flicking around the busy room, looking bored and maybe tired. My neighbor, the guy who continually parked in my spot. The guy who I was pretty sure kept stealing my newspaper. The guy who never said hello, never smiled, and dammit, I still found him attractive.

“You’re my neighbor.” His voice was low, but easy to hear over the din of the room.

I nodded, wondering why he deigned to speak to me. And maybe I was trying to not squeak, or blush, or stutter.

“Thanks for not towing my car.”

“I will, if you park there again,” I said in a clear voice. It sounded normal, I thought. Serious. It was my best teacher voice.

His lips turned up. Was this his version of smiling? He nodded, knocked on the table; turned and walked away.

“Yeah,” I agreed. The two of us giggled as his pheromones continued to cloud our booth.

He returned to the bar, sitting down and staring at me. The wood grain of the table held my attention as I meditated hoping to stop the slow burn creeping up my neck from reaching my cheeks.

I smirked. “So, now that I have his attention, I’m not sure I like it.”

“Oh…” She turned her head, quickly glancing at the bar and turned back to me, her eyes wide. “Do you want to go?”

My mug was nearly full. We’d been there for twenty minutes. I’d planned to watch the game, maybe have some nachos, gossip about whether the PE teacher was doing the Art teacher at our school. But suddenly, under the scrutiny of a man I’d been fantasizing about for weeks, all I wanted to do was hide.

But that was stupid.

I wasn’t his type. I was just his neighbor.

The one who put up with his stealing my newspaper. The one who didn’t tow his car. I shook my head, angry at myself for letting him get away with it.

We stayed. We watched the game. He sat at the bar, friends joining him, cheering loudly. I’d nearly forgotten him completely, until I drove home.

And there was his car… in my spot.

He’d known, the little snot, that he’d done it again and didn’t say anything. Didn’t apologize about parking there tonight. Didn’t mention it. Nope. He’d smiled — because he was so freaking gorgeous that women happily did his bidding. They probably loved his brooding manner.

I dialed the tow company number, arranged for it to be towed, and parked in the visitors spot that I’d been using for over a week now.

The tow truck arrived forty minutes later, it took twenty minutes for them to load the car on the back and drive away. I moved my car to my spot, locking it up and locking myself in my apartment.

I awoke, at 2:30 to loud knocking on my door. Peeking through the keyhole, there he was, Mr. Brooder, except now he was angry. I didn’t open the door.

“Your car is towed,” I said. He was seething – honest to god seething. His shoulders rolled back, his nostrils flared, I could almost hear his breath roar out. If he’d been a dragon, I’d been toast. “Good night, neighbor.”

He stood outside for a moment longer. Eyes narrowed, before he muttered something very rude.

Why had I found him attractive? Suddenly Paul, the nice guy, the social studies teacher with one testicle and rumored to have three nipples was far more attractive. I crawled back into bed, reassessing my Pavlovian response to muscles. Sure, the surly neighbor could lift heavy things, but would he? What did I really want; Mr. Angry, or the guy who made me laugh during long torturous faculty meetings?

In the morning, I packed an extra apple for Paul, and when I walked into school, I placed it on his desk. He looked up surprised, but then smiled warmly.

“Good morning, Ms. Brooks.” His brown eyes crinkled in the corners, crow’s feet on a young face because he smiled so much.

“Good morning, Mr. O’Reilly.” My heart tripped happily in my chest. “Did you catch the game last night?”

He nodded, and then stood up, standing close to me as his students filed in noisily, calling greetings to each other. “Have lunch with me today?” he asked hopefully.

He’d asked before and I always turned him down because…. because I was an idiot.

“I’d like that,” I said. I smiled and left his classroom, his students gossiping already about us.

Kat was waiting for me in my classroom. “Well?” she asked, fully aware that I had intended to do something. I nodded with a silly grin on my face. “Took you long enough,” she said. “He’s a much better kind of brooder.”